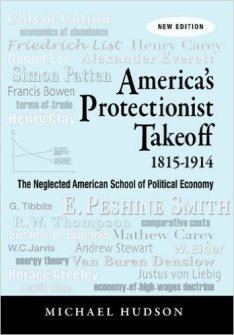 US industry was protected by tariffs for much of the 19th century and this helped establish it as the world’s leading economy. This is contrary to much reported history and to the current conventional wisdom regarding international trade and development.

This is the claim made by economist Michael Hudson in America’s Protectionist Takeoff 1815-1914. In this fascinating book, he tells the story of the neglected American School of Political Economy (ASPE), whose ideas and policies shaped the US economy, and its industrial sector in particular, for many years. Their economics ran against the ideas of the English classical political economists Ricardo and Malthus and was more like statecraft than pure economic theory.

The often anti-intellectual ASPE seems to have been airbrushed out of history, which makes Hudson’s book (originally published in the 1970s) all the more important to the undermining of the orthodoxy which global elites push on late developing nations which have yet to industrialise.

In fact, pretty much every single successful rich economy adopted protectionist policies while they were industrialising. Once they had become rich and their firms were sufficiently competitive, they started to push a free trade agenda on other nations, citing the theory of comparative advantage and its successors which have become part of neoclassical economics, the dominant school in current debates and academic teaching. Free trade has become an ideology, but it is one used by the richest and most powerful nations and firms to sustain their dominance of the globalization process.

The members of the ASPE thought that America, a relatively high wage nation in international terms at the beginning of the 19th century, needed to protect its domestic market and encourage industrialisation instead of remaining a predominantly agricultural economy. Instead of focussing on economic theories of static allocation, they saw the importance of what they called ‘productive powers’, or the potential for industry and its embodied technical progress to raise productivity in dynamic fashion, allowing both the profits of capitalists and the wages of workers to increase together. Contrary to their interpretation of European Marxism, the two classes therefore had a shared interest in rising productivity and output, rather than a conflicting one.

Improvements in industrial productivity and new technology made possible by a period of protection would make firms competitive internationally. Wages could rise, but if productivity rose at the same rate or even faster, unit labour costs would stay constant or fall, and firms’ output would then be able to displace imports and export abroad. In this way, the protection of infant industries would lead to international competitiveness and America’s exports would have an absolute cost advantage.

Protection from global competition would not prevent competition in America’s large and growing domestic market. Demand in the latter would also be stimulated by a growing population and rising wages. To coin Adam Smith, growth in output and productivity would be fuelled by growth in the ‘extent of the market’. High wages and improved worker training and education would also make for a more healthy, skilled and productive workforce, promoting a virtuous circle of growth in output and living standards.

The ASPE faced opposition from slave-owning and agricultural classes, who were benefitting from cheap manufactured imports from England, and the ability to export agricultural output in return. They argued that over the longer term, farmers specialising in the production of one export crop would deplete the soil and this would lead to declining productivity. America was rich with land, but with a growing population this would not last forever, and there was a need for new scientific ideas to be applied to agriculture, such as crop rotation and chemical fertilizers, which would sustain or increase productivity and prevent mineral depletion in the soil. Thus scientific ideas should be applied to agriculture as much as industry and would help to make the nation prosperous.

The ASPE found its voice in the 19th century Republican Party and was opposed by the Democrats of the time, who were apparently supported by the agricultural and slave-owning interests. This seems quite different to today’s crop of US politicians and policies. Having said that, when the situation demands it, politicians of any stripe will often play the nationalist card, and enact policies which they hope will promote the domestic economy.

These ideas are fascinating to me. I was aware of the extent of protection among the early industrialisers, as well as later ones such as South Korea and Taiwan. But this historical account of political economy in the US should be made more widely known to economists and policy-makers. Today’s late industrialisers need to be given the ‘space’ to encourage domestic infant industries until they have to some extent ‘caught up’ with the richer nations. Sadly this remains a minority opinion and the richest and most powerful leaders, from politics to business, will tend to find more appealing policies which promote and sustain their own interests. Today’s economics should be more contested than it is. It needs to reflect the real history of the rich nations which, once upon a time, not so long ago, were poor too and did something about it.

This site uses Akismet to reduce spam. Learn how your comment data is processed.