Yanis Varoufakis explains in the short video below why austerity doesn’t work. He uses the example of the UK economy, and leaves out the foreign sector (trade and investment), which does simplify things. I would argue that including the latter in the model is in fact vitally important to our understanding in the case of economies open to foreign trade and investment.

One reason for this is because a deflation which results from government austerity reduces the demand for imports from abroad, which negatively affects trading partners. Devaluing the currency can also have this effect, and is potentially an example of a ‘beggar-thy-neighbour‘ policy. The devaluing country may only gain at the expense of others, which can invite retaliation. This can take the form of competitive devaluation: if one country devalues, its growth might increase for some time, but if all countries do the same, the global benefits may be zero, while their distribution will tend to be uneven.

A small country open to international trade can adopt a deflationary fiscal policy and devalue its currency, in order to rebalance its economy away from domestic demand and improve its export competitiveness. This has often been the policy imposed by the IMF on developing countries in crisis as a condition of lending.  But if all countries deflate and devalue, the result will be a global recession.

This illustrates the importance in macroeconomics of analysing the world economy as a whole system, whose interacting parts can produce effects not obvious when looking at a single economy. This is an insight found repeatedly in the work of Michael Pettis, whose book The Great Rebalancing offers an original explanation for the Great Recession of 2008 and the likely global economic outcomes in the years ahead.

Last week the UK government’s new Chancellor of the Exchequer, Phillip Hammond, known to some as ‘spreadsheet Phil’, gave his first Autumn Statement to parliament. This outlines the state of the UK economy and the government’s finances, and announces new policies on government tax and spending.

The forecasts of the Office for Budget Responsibility for the UK economy’s likely trajectory over the next few years were somewhat gloomy, and laid much of the blame for this at the door of the decision to leave the EU, or Brexit. Growth will be slower, investment weaker, and public borrowing and debt higher than otherwise.

I will avoid reiterating details regarding the Autumn Statement that were covered in last week’s press, and instead focus on the potential for debt reduction and overall economic performance over the next few years, which the government is trying to manage and improve upon: the Prime Minister wants an economy that ‘works for all’. Fine aspirations indeed. END_OF_DOCUMENT_TOKEN_TO_BE_REPLACED

Economist Michael Hudson on some of the trends in contemporary economics, and plenty more besides! He is certainly a fountain of ideas. While I am not sure that I agree with it all, he remains thought-provoking, taking points of view that are definitely unorthodox. For me in particular, his theory, drawing on classical economics, that government-funded provision of education, health, welfare etc can lower production costs and make the economy more competitive is an important one in a world in which the private is so often assumed to be more efficient than the public.

His criticism of Obama as blowing the chance to be a great president during a potentially major turning point in world history, and in fact being a worse one than George W Bush, was unexpected.

This interview was produced by the Real News Network, which is a useful source of independent reporting.

Professor Anwar Shaikh, author of this year’s magisterial Capitalism: Competition, Conflict, Crises, with some brief thoughts on the sustainability of capitalism. For him, its dominant forces, such as the drive for profit, need to be channeled through appropriate policy, and its destructive side effects somehow negated. The aim should be to benefit the many, moreso than in today’s often hugely unequal societies. This is something that I absolutely agree with and I remain hopeful for this kind of outcome, at least in the longer term.

A nice brief animated video narrated by Martin Wolf of the Financial Times, on why global trade imbalances matter. Such ideas are part of the explanation for current tensions over the direction of globalization and international trade, in the face of sluggish economic growth in many countries.

Mass immigration across the capitalist world is arguably one of the factors that has been fueling nationalist and populist politics. From Brexit in the UK to Trump in the US, anti-immigration rhetoric has proved appealing to many. Despite promises made by former Prime Minister David Cameron here in the UK, net immigration from the EU and beyond has been substantial since the Conservatives came to power in 2010.

It is clear that huge numbers of immigrants come to the UK to find higher paying jobs than they would get in their home countries, and the EU’s policy of free movement has been part of this story. A number of Eastern European countries joined the EU in 2004, when Tony Blair’s Labour Party was in power, and immigration soared. Nevertheless, until the Great Recession of 2008, unemployment stayed relatively low. It rose during the recession but has since fallen back to fairly low levels, with record numbers now in work.

If those immigrants who have taken low paying work in the UK have had any impact on the labour market, it is argued that this has been through them depressing wages at the bottom of the distribution rather than affecting overall employment levels. This has been the subject of debate, and I will not go into that here. What I want to argue is that part of the response to those who are concerned about immigrants should be to encourage the creation of better-paid jobs in their home countries. END_OF_DOCUMENT_TOKEN_TO_BE_REPLACED 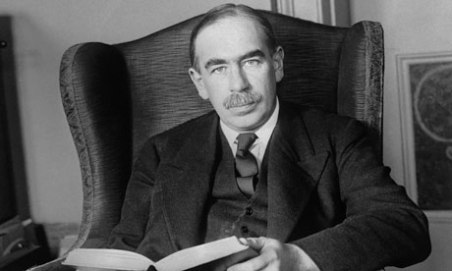 “The important thing for Government is not to do things that individuals are doing already, and to do them a little better or a little worse; but to do those things that at present are not done at all.”

I like this quote from the great economist, but although it may be clear in some instances what is ‘not done at all’ through private initiative, there is still plenty of room for debate about what the state should do.

One must remember that ultimately Keynes worked hard during the latter years of his life to try to save capitalism from itself by remedying its apparent defects, such as mass unemployment and poverty. He lived through two World Wars and the intervening Great Depression of the 1930s. These disasters profoundly shaped his thinking about economics and the role of state intervention in the economy. It is therefore misinformed to decry such intervention as socialist.

The mixed economy of the post-war years in the end outperformed state socialism both materially and socially, although its progress was halted in the 1970s by the crisis of ‘stagflation’ (the novel phenomenon of inflation and unemployment rising together).

I think that Keynes and today’s post-Keynesians are wrong that there is a permanent solution to recession through state intervention, but that despite this, we should not reject the latter which remains vital to the positive evolution of the economy and society.

Three economics graduates have savaged the way the subject is taught at many universities. Joe Earle, Cahal Moran and Zach Ward-Perkins are all, they write in The Econocracy: The Perils of Leaving Economics to the Experts, “of the generation that came of age in the maelstrom of the 2008 global financial crisis” and embarked on […]

Following yesterday’s quote, a brief video featuring Professor Mariana Mazzucato, who specializes in the economics of innovation and the role of government in shaping new technologies for inclusive growth. I can highly recommend her eye-opening book The Entrepreneurial State – Debunking Public vs Private Sector Myths.

“[W]hen organised effectively, the State’s hand is firm but not heavy, providing the vision and the dynamic push (as well as some ‘nudges’ – though nudges don’t get you the IT revolution of the past, nor the green revolution today) to make things happen that otherwise would not have. Such actions are meant to increase the courage of private business. This requires understanding the State as neither a ‘meddler’ nor a simple ‘facilitator’ of economic growth. It is a key partner of the private sector – and often a more daring one, willing to take the risks that business won’t. The State cannot and should not bow down easily to interest groups who approach it to seek handouts, rents and unnecessary privileges like tax cuts. It should seek instead for those interest groups to work dynamically with it in its search for growth and technological change.”

My Tweets
Join 732 other followers

The Political Economy of Development
Blog at WordPress.com.
Loading Comments...