This is the last in the recent series of excerpts taken from Ha-Joon Chang’s Economics: The User’s Guide. Chang is an economist at Cambridge University (his personal non-academic website can be found here) and specialises in development economics. He has also written a number of popular books, some of which aim to debunk many of the myths of mainstream economic discourse.

The User’s Guide is one such, aimed at the lay reader rather than academics, and engages in a pluralist introductory approach to economics. I have therefore chosen a number of quotes over the past few months which stood out for me and which I felt were worth sharing. Here is Chang on p.453-5:

“Johann Wolfgang von Goethe, the German writer (Faust) and scientist (Theory of Colours), once said that ‘everything factual is already a theory’. This is something to bear in mind when looking at economic ‘facts’.

Many would assume that numbers are straightforward and objective, but each of them is constructed on the basis of a theory. I might not go as far as Benjamin Disraeli, the former British Prime Minister, who quipped that ‘there are lies, damned lies, and statistics’, but numbers in economics are invariably the results of attempts to measure concepts whose definitions are often extremely contentious or at least debatable.

This is not just an academic quibble. The way we construct economic indicators has huge consequences for how we organize our economy, what kind of policies we implement and ultimately how we live our lives.

This applies to even the most basic figures that we take for granted, like GDP or the rate of unemployment. The exclusion of household work and unpaid care work from GDP has inevitably led to the undervaluation of those types of work. GDP’s inability to take into account positional goods has directed consumption in the wrong direction and made it an unreliable measure of living standards for rich countries, where those goods are more important. The standard definition of unemployment underestimates the true extent of it by excluding discouraged workers in the rich countries and the under-employed in the developing countries. Naturally, these types of joblessness have been rather neglected by policymakers.

All of this is not to say that numbers in economics are all useless or even necessarily misleading. We need numbers to be able to get the sense of the magnitude of our economic world and monitor how it changes; we just shouldn’t accept them unthinkingly.”

Voices on the left have been calling for a Green New Deal as a radical way of transforming the economy in order to tackle a confluence of crises: environmental, social and economic. It takes its name from FDR’s efforts to overcome the Great Depression in the US during the 1930s.

Yeva Nersisyan and L. Randall Wray, both proponents of Modern Money (or Monetary) Theory (MMT) have produced a short paper published by the Levy Institute in which they attempt to answer the question posed in its title: Can We Afford the Green New Deal?

The GND itself could include a “carbon-neutral energy policy and reversing climate change; universal single-payer healthcare; student debt relief and free public college; prison reform; ending “forever wars”; increasing care for the young, sick, and old; and the job guarantee.”

Employing their MMT framework, they argue that “there are no meaningful financial barriers to taking action”, rather “the question is whether sufficient real resources – workers, plant and equipment, raw materials – can be marshaled to implement” it. They draw inspiration from John Maynard Keynes’ 1940 work How to Pay for the War, making the case that the main barrier to such an ambitious government programme of public spending is inflation fueled by excessive aggregate demand, which can if necessary be curtailed by raising taxes or, should this prove insufficient, by other measures used in wartime such as price controls and rationing.

Donald Trump has said that “trade wars are good, and easy to win”. I posted on the issue of protectionism in the wake of his election victory here, and on ‘beggar-thy-neighbour’ policies here, and stand by my arguments.

Contrary to the claims of mainstream economics, free trade is not always mutually beneficial for the nations involved. In particular, the historical record suggests that particular ‘infant’ industries in developing countries can benefit from temporary and selective protection, until they are competitive enough to succeed on world markets.

There are plenty of examples of infant industry protection which have failed, so it is by no means a universal panacea. Success requires the management of a particular balance of power in a developing country between particular groups such as the state and social classes, which might include emerging industrial leaders or the middle class. It will also be context-specific: it depends on the historical evolution of the groups and society involved.

Trump’s tariffs on steel and aluminium imports are not an example of protecting an infant industry. They may protect some jobs in those sectors, but most economists argue that by increasing the costs of these products as inputs for other industries, many more jobs will be lost in the latter, so that the net employment impact will be negative. END_OF_DOCUMENT_TOKEN_TO_BE_REPLACED

Since taking office Trump has proved unpredictable, but what are the likely outcomes of his policies? His executive orders aside, he has not had it all his own way, despite Republican majorities in both houses of Congress.

Yesterday I outlined the economic causes of the rise to power of this ostensibly populist president. This post reviews some of the potential consequences of Trump’s economic policies, as discussed in the book Trumponomics.

The centrepiece of Trump’s economic strategy, if in fact it has any coherence at all, is a pledge to put ‘America first’ and raise the growth rate of the US economy from its currently sluggish 2% per annum, to something like 4%. In doing so, he has promised that this will create 25 million jobs over ten years.

The pledge on jobs, if it is achieved, would in fact be nothing special when looking at the US record since the last recession. END_OF_DOCUMENT_TOKEN_TO_BE_REPLACED

A series of interesting short videos featuring Anwar Shaikh of the New School, an economist I greatly admire, where he discusses his influences and aspects of his life’s work.

His magnum opus, Capitalism, was published last year, and I have written on parts of it several times on this blog.

For those who don’t want to go through them all, I can recommend as a taster video number nine (of eleven), ‘Keynes and Classical Economics’, where he discusses the links he makes between the ideas of Keynes on aggregate demand, and competition and profitability in the work of Marx and the Classical economists. To reach this, press play, then skip forward between videos using the player controls.

The passage below is taken from the concluding pages of John Maynard Keynes’ famous General Theory, where he speculates on the benefits to international relations from avoiding conflict over international trade. If full employment can be achieved domestically through judicious government policies this would, he hoped, lessen the need for countries to come into conflict with each other over the balance of payments of trade, investment and capital flows.

Given the historical record, I am actually skeptical about the possibilities for achieving and sustaining full employment, however that might be defined. I am therefore not a perennially optimistic Keynesian. Sooner or later, growing economic imbalances will give rise to crisis and recession, and rising unemployment. However, I do think the world economy could be more wisely managed than it is now, with the US the (still?) reluctant hegemon and a rising China among other potentially destabilising trends. END_OF_DOCUMENT_TOKEN_TO_BE_REPLACED 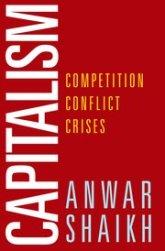 Anwar Shaikh is a Professor of economics at the New School for Social Research in New York. His ideas, in his own words, draw mainly but not exclusively on the ‘Classical tradition’ of Smith, Ricardo and Marx. Marx himself was a critic of classical political economy, so in some ways Marxist political economy could be considered as a separate school of thought.

In Shaikh’s 2016 magnum opus, Capitalism, he also draws on Keynes and Kalecki, two economists who greatly inspired the post-Keynesian school. For Shaikh, the Keynesian/Kaleckian emphasis on aggregate demand remains important, but so too does aggregate supply, which is emphasised in mainstream neo-classical economics. According to Shaikh, the classical tradition is not so much demand-side, or supply-side, but ‘profit-side’. The rate of profit is central to his work, and it affects both demand and supply in the capitalist economy.

In this post I want to outline Shaikh’s theory of wages and unemployment, which is covered in Chapter 14 of Capitalism. He covers a great deal of theoretical and empirical ground in the book, not least in this chapter, and it makes for stimulating reading. To avoid making this post too long, I will focus on Shaikh’s own particular theory, rather than spending much time comparing it to alternative theories, which Shaikh does in the book. END_OF_DOCUMENT_TOKEN_TO_BE_REPLACED

William Lazonick, professor at University of Massachusetts Lowell, explains how rationalization, marketization, and globalization characterize the U.S. economy during the past 50 years, and how the behavior of companies and fate of American workers have changed during this process.

Many of my European friends ask me about Martin Schulz and the success of social-democrats at the polls. Since they are progressive, they hope for reforms in the eurozone to curb mass unemployment, stellar youth unemployment and social problems that exist in many crisis countries. I always had my doubts if Martin Schulz was the […]

via … and austerity for all! (Martin Schulz reloaded) — econoblog101

This nine-minute interview with left-Keynesian economist Dean Baker discusses the wisdom or otherwise of the Federal Reserve’s interest rate hikes and their effect on jobs and wages. He notes that despite a low unemployment rate in the US, other measures of the ‘tightness’ of the labour market indicate that there may be more slack in the system and more room for job creation than allowed for by the Fed.