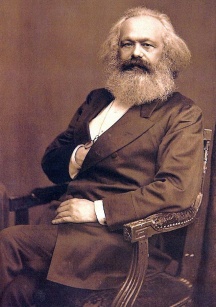 A brief excerpt from Capital Vol 1, on the dynamism of capitalist growth (what Marx and the classical economists called accumulation), and the necessary creation of surplus labour, the famous ‘reserve army’ of the unemployed, to long run development. It is ideas such as this and their appearance in reality which make me reluctant to fully embrace the Keynesian notion that full employment under capitalism can be both created and sustained:

“The mass of social wealth, overflowing with the advance of accumulation and capable of being transformed into additional capital, thrusts itself frantically into old branches of production, whose market suddenly expands, or into newly formed branches, such as railways, etc., which now become necessary as a result of the further development of the old branches. In all such cases, there must be the possibility of suddenly throwing great masses of men into the decisive areas without doing any damage to the scale of production in other spheres. The surplus population supplies these masses. The path characteristically described by modern industry, which takes the form of a decennial cycle (interrupted by smaller oscillations) of periods of average activity, production at high pressure, crisis, and stagnation, depends on the constant formation, the greater or less absorption, and the re-formation of the industrial reserve army or surplus population. In their turn, the varying phases of the industrial cycle recruit the surplus population, and become one of the most energetic agencies for its reproduction.” (Chapter 25, p. 785).

The writing is certainly powerful in places, and this short paragraph covers plenty of ideas: growth and business cycles, technological and structural change, and employment and unemployment. Marx was certainly not right about everything, but his extensive yet largely unfinished project should not be ignored by those wanting to understand the modern world, where it came from and where it might be going.

4 thoughts on “Marx on growth and ‘normal’ unemployment under capitalism”

This site uses Akismet to reduce spam. Learn how your comment data is processed.